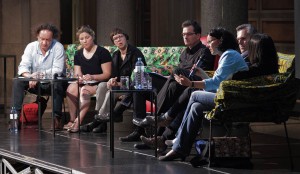 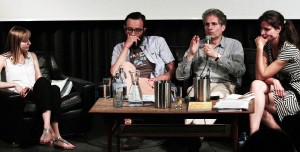 THE ART WORK IS NEVER FINISHED

In the Western tradition we are used to think of art works, once they have been made public, as finished and thus stable. Ideally from then on, they are preserved for eternity in specialized institutions like museums. With the growing importance of digital cultures and the increasing influence of non-western cultural traditions, these assumptions are called into question. Increasingly, the art work is regarded as unfinished and considered only temporarily fixed, changing in versions, adaptable to contexts and usages. It is, at the same time, a finished product and raw material. This poses serious challenges to the theory and practice of cultural production. Does the concept of the art work need an update?

Copying as a Means for Creativity? ‘Chinese Creativities’ and Plagiarism on the Chinese Bestseller Market

Lena Henningsen, writer and journalist and working as an editor for Süddeutsche Zeitung in Munich, Germany. http://www.sinologie.uni-freiburg.de/index.php/mitarbeiter/profs/henningsen

Dirk von Gehlen, writer and journalist and working as an editor for Süddeutsche Zeitung in Munich, Germany. http://digitale-notizen.de

The rise of sharing as a new paradigm is embedded in large-scale social and political transformations. Some speak of the 3rd industrial revolution; others envision a world beyond capitalism. While the crisis of the traditional paradigms, particularly in the cultural industry is a matter of daily experience, is necessary to understand more about the larger dynamics driving this. How to understand these transformations? How to develop models that do not simply support new business cycles but rather increase transparency and participatory aspects? How can such a new model relate to state and markets?

How to Render the P2P/sharing Economy More Autonomous

Michel Bauwens, founder of the Foundation for Peer-to-Peer Alternatives works with a global group of researchers in the exploration of peer production and governance. http://p2pfoundation.net

R. Trebor Scholz, associate professor for Culture and Media at The New School in NYC. http://newschool.academia.edu/TreborScholz

Sharing Beyond the Digital Sphere

From Free Software to Wikipedia, from Alpine meadows to new urban gardens, the commons are increasingly identified as an alternative mode of production; a model which rather provides use-value to communities than exchange-value to markets. However, immediately the question of how to finance these commons is raised. If this is to be sustainable beyond certain niches, there is a need to raise money outside the commodities exchange market. State support plays a role, but cannot provide the main funding. A new regulatory framework needs to find a balance of interests to maintain and expand the commons. Different models of how to address this question will be investigated with a focus on the field of art and culture. How to realize the benefits of a commons and what are pitfalls to be avoided?

The Challenges of Sustaining a Cultural Society with Multiple Contributors

Art Continues to Evolve. Will we Do the Same?

Digital media allows for new forms of collaboration and networked modes of cooperation locally and globally; not only in distributed production chains or the field of software development but also in the arts and culture. Collective action that intervenes in processes and flows of signs and sounds becomes more relevant than past models of isolated genius. Practices that draw on technical intelligence and diverse skills are necessarily based on cooperation. What are critical cultural practices in a fluid field of Network society beyond the obsolete 19th century model of the individual author and the aura of the fetish object? What means authorship in the regime of the creative imperative after “the death of the author”?

Tools for a Read-Write World

From Visiting to Living, Into the Archive

In digital environments the transaction costs for publishing, distribution, logistics and administration has fallen dramatically. It is not so much about big trucks distributing tons of material to thousands of outlets than about paperless trails and automatized logistics. Many forms of cultural production have been democratized with widely accessible tools and independent producers can benefit from digital scaling effects. Social networks and recommendation systems unseat the dominant powers of industry marketing campaigns and mass media. While traditional roles of cultural gatekeepers have become outdated, there is a need for new intermediaries that do not function as privatizers of social surplus, but as partners of independent cultural producers.

Jamie King, producer/director of the “Steal this Film” series and founder of the VODO project in London http://vodo.net

Can there be a Commons without a Community? Shifting emphasis from the Free and Open to the Commons and the Collaborative economy.

The orchestration of efforts and the organization in collectives and ensembles comes naturally to musicians. Collective practices and the free exchange of ideas and skills is a central element of musical practice over the centuries. It draws on a commons of tunes, rhythms and collective moods. Digital music culture is mixing and meshing on the shoulders of a giant heritage. Sound system culture collectively organizes around a shared technology and social space. However, social synchronization through shared ritual practices needs to be balanced by independent structures and new forms of association in autonomous networks. While largely invisible in mainstream culture, marginalized networks often spawned the most interesting cultural innovations.

The rhythm voodoo: hypnotizing dubgrooves live on stage! For this special Vienna set, HHY & The Macumbas will present a special sonic apparatus. Operating the intervals between percussion and its echo, sub bass and its resonance, the flesh and skin of the percussion with the electric blood of the mixer.

Is it a phantom? Multiple identities? It is the famous European collective DJ!

»c0ntainer is a web, laying out its tiers of social sounds on earlier techno concepts«

Sound system culture: and the beat goes on!

A workshop with Marcell Mars and Christoph Kummerer

Be Your Own Public Library!

Marcell Mars[0] introduces his extension[1] to the free Calibre[2] e-book management software, that allows everybody to share their own collections with the world.

No matter if you are a researcher, journalist, scientist, literary geek or a collector of the odd or otherwise hard to find, this workshop will show you new ways of discovering material as well as sharing your own painstakingly collected and indexed stock of works with the world.

The workshop will get you up to speed with Calibre and the book-sharing extension, discuss the reasoning behind it and hopefully gather some input from the participants on how to move forward.

Bring your own computers.