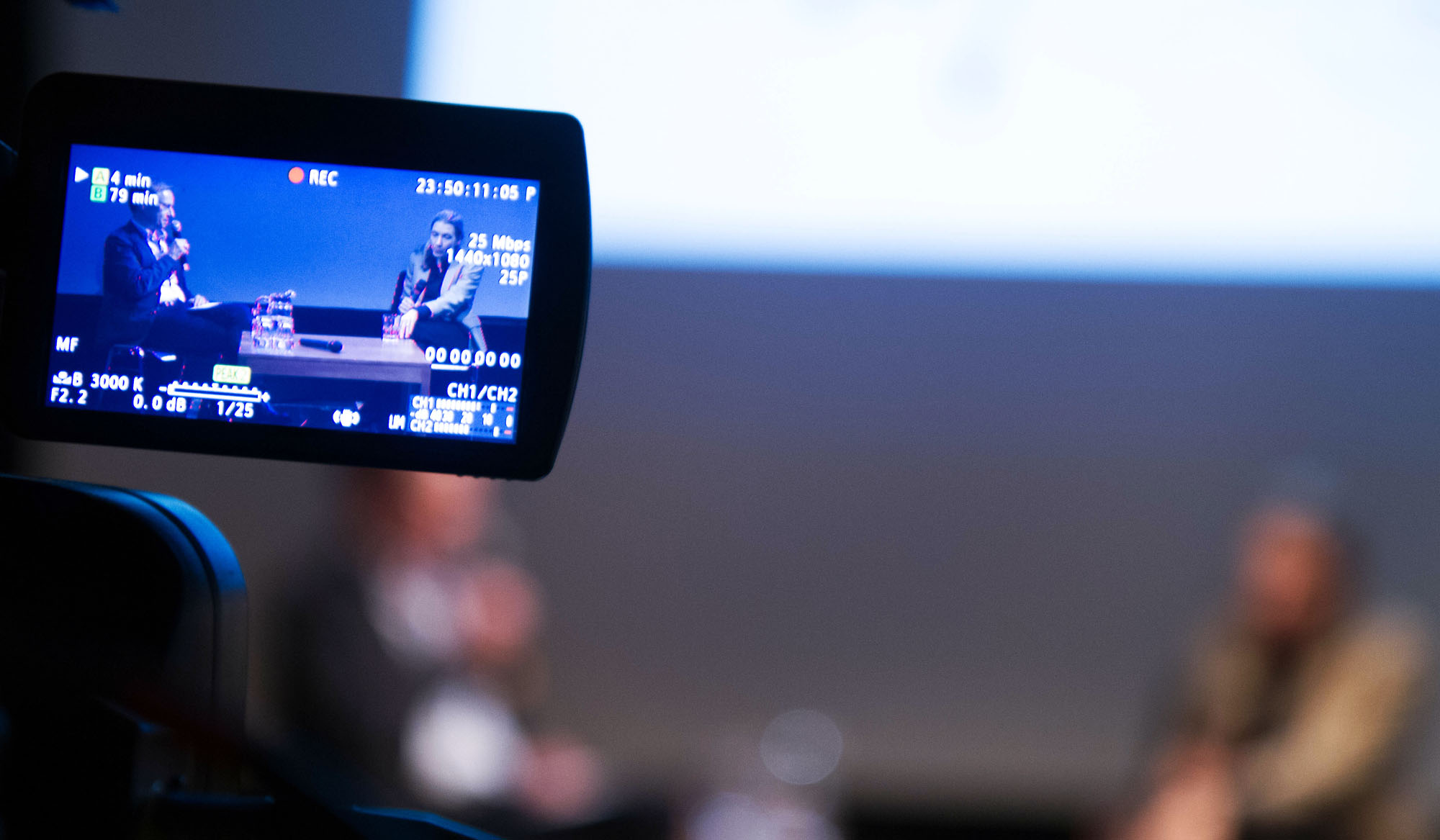 A Report on Hybrid Systems

As Felix Stalder (World-Information Institute) explains, the event continues, a series that explores how algorithmic decision-making systems are increasingly permeating various aspects of our culture and everyday life. The series began in 2015 with the conference “Algorithmic Regimes”, in which various areas – from the health to urban planning and crime prevention – were investigated on how they deal with these systems. In the follow-up project “Painted by Numbers” the format of a video installation was used to present interviews in a way that creates a polyphonic collage that cannot be reduced to one perspective. The installation accompanied the event set up in the foyer and bar. To be many voiced is the specificity of the series, which does not want to present a certain perspective, but sets in motion a variety of perspectives in a transdisciplinary setting. This is also the case in “Hypernormal Hybrids“, where a central theme is the concept of ‘intelligence’.

In the first part moderated by Christian Höller (Springerin, Vienna), S.M. Amadae (University of Helsinki and Massachusetts Institute of Technology) uses the rationality paradigms of rational choice and game theory as well as information theory, computability and quantum thermodynamics to explore the profound links between ‘information revolution’ and neoliberalism. In this context, human intelligence is as it were approximated to the concept of artificial intelligence, reduced to a physical status of the brain, and thus practically eliminating both the reference to meaning and the element of freedom. After an intervention by Konrad Becker (World-Information Institute), which focused on invisible algorithms and systems to control decisions and provided a larger associative context to S.M. Amadae, the second part deals with the two forms of intelligence that, are most evident alongside those of humanity: artificial intelligence and the intelligence of animals.

Stefan Woltran (Vienna University of Technology) gives a brief overview of current concepts of artificial intelligence and illustrates their practical limitations by means of image recognition. A look at the achievements of AI in the field of games (a series of victories by artificial intelligences over the respective World Champions from Checkers to Chess as early as the mid-1990s to Go in 2016) results in a rejection of the interpretations often employed in mass media. These programs are very specialized – for example, you could not use the Go-computer in Chess – and the goal would be ‘General Artificial Intelligence’, but we are still a long way from realizing it. More important than fantasies about the future is dealing with the immediate dangers, especially with regard to the impact on the labor market, AI in weapons and the problem that biased data leads to biased AI.

In her contribution, Susana Monsó (University of Veterinary Medicine, Vienna) focuses on the problem that research on the intelligence of animals always uses human forms of intelligence as a benchmark. It thus classifies animals on a scale that runs from zero to human intelligence – while specific forms such as animal instincts are usually considered inferior. Monsó juxtaposes examples of mainstream experiments on speech understanding and tool use with specific animal forms of intelligence: on the memory skills of birds, who in winter easily find the seeds hidden in hundreds of places in the summer before, or the collective intelligence of bees and ants. She raises the question, whether a constructed superiority of humans could be called into question by other criteria, such as the sheer survivability. Then Tardigrades would be far superior, which can survive not only 30 years without food and water, but also, among other things, survive to be frozen or cooked, or easily endure the hundredfold lethal amount of radioactivity for humans. The relationship between animal and human is also modeled in research by opposing attitudes: either by the search for the uniqueness of man and thus the fundamental differences with the animals, or on the contrary by the search for the similarities.

The event does not remain in just one dimension of argument. The theoretical examination is broadened by an artistic one, which adds the practice of a positive form of human-machine interaction to the criticism of their neoliberal deformation. This begins with the aforementioned polyphony of the video installation in foyer and bar, continues in Konrad Becker’s intervention, in which sound and fast image sequence structure the rhythm of thought, and screenings, which include excerpts from Adam Curtis’ documentary. “Hypernormalisation” or to the Nigerian afro-futuristic no budget film” The Day they Came”.

The second part of the evening is taken over by this layer of investigation. Boris Kopeinig, an artist associated with World- Information Institute and its predecessor projects for a long time, kicks off a lineup of electronic performances. His sound is accompanied by a video stream of infinite series of numbers. Anyone who follows the link to his website for the event in the program will only find enigmatic signs. Without explanation, they seem like links, but when you click on them they disappear, to only leave a blank screen behind.

Napalm Tree, a duo that has started their performances at art spaces and in small clubs in Vienna, is a highlight of the evening. While one of the duo is present live on stage, the other, with her video image towards to the auditorium, is connected via Skype from Dakar. In a hybrid space with digital gadgets, voice and remote communications they entrance audiences in a subtle mix of soulful machine noises. It was followed by ca.tter & mstep, active in their joint project “55orondy”, with solid abstract grooves and rare bionic beats, and a set by DJ Plak, a pioneer of electronic bass music in Vienna.

If one tries to identify some of the central points of the event, then first of all the detailed presentation of the connection between ‘information revolution’ and neoliberalism in the lecture of S.M. Amadae needs to be mentioned. Amadae has worked extensively on Rational Choice theory and game theory in her book “Prisoners of Reason,” published in 2015. Starting from three godfathers of computer science – Claude Shannon, John von Neumann and Alan Turing, in “whose vision of the future we are now living in”, Amadae says  – it shows step by step the interlocking of several aspects: quantification, algorithmic processing, reduction of information to the processing of symbols, and in addition the medium money, which, as a generalized measure, takes over the succession of energy / heat from the physical models followed by neoliberal ones.

Amadae’s overall assessment is bleak: “This rationality paradigm begins to define and limit our world and the possibilities we have in it. We live in an information age, but the meaning is lost; we live in a world of computation, but intelligibility is lost; and the quantum revolution should actually broaden our possibilities, but the opposite is happening.” So the question of resistance arises. Amadae, who fundamentally argues on a narrow line when she opposes neo-liberalism with the values of liberal democracy, does not present a political strategy, but advocates insisting on values that become most tangible when Amadae confronts alternatives to the paradigms mentioned above. Such as the view that communication conveys symbols devoid of meaning, to a concept of communication that refers to interpretable meaning. Or the concept that considers any uncertainty to be quantifiable vs. the possibility of absolute unpredictability.

One problem is the ever-growing inequalities in knowledge production. Research projects make great efforts to build up counter-expertise in the sense of Amadae’s work but are hardly able to work continuously in a university landscape that is increasingly geared towards exclusively equipping students with market-compliant skills. A similar problem is addressed in the discussion with Stefan Woltran: If private sector actors such as Google are not only able to offer researchers the best conditions, but also have huge databases that are not accessible to university research, it is hardly possible for the latter to keep up with them.

The event has succeeded in shedding light on the intelligences of the Hypernormal Hybrids – their autonomy and specificity as well as their relationships and dependencies. The decidedly transdisciplinary approach and the dramaturgy, which placed a performance in the middle of the discursive parts and thereby strengthened associative thinking, prevented disparities from disappearing by being re-contextualized. The topic is thus exposed and open to future steps of broadening as well as deepening individual aspects.