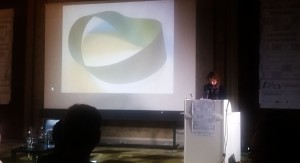 ALGORITHMIC REGIMES and GENERATIVE STRATEGIES: a conference on the agency of algorithms in culture and society hosted by World-Information Institute in Vienna, September 25th 2015.

Participants agreed that the use of digital automation processes can be seen positively as long as the open and transparent access to digital control systems can be ensured. Nevertheless, the current development was considered critical. Peter Purgathofer the Institute for Design & Assessment of Technology: “In order to develop technology for people one needs to understand their needs, desires and ambitions- engineers are usually not interested…” He points to a future of technical complexity where “We soon come to a point where we will no longer understand what software does.”

Reinhard Kreissl, director of the Vienna Centre for Social Science Research Security is skeptical towards the analysis of large amounts of data for predictive policing and stresses that the manufacturers of such systems cannot keep their promises “side effects usually outweigh the intended effects”. The knowledge gained is rather low, but there is a risk of “reinforcing existing stereotypes”. 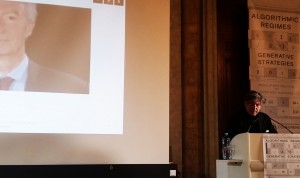 Btihaj Ajana from Kings College London focuses on bioinformatics and bio-politics of identity, with new forms of digital personalization and self-quantification healthcare, and argues for a “new concept of the future beyond technocratic predictions”.

Thomas Sturm explores the history of science in terms of rationality, reason and formal rules and reflects the scientific milieu in the Cold War: “It was an unprecedented effort during the Cold War, to find out what people thought, what it means to act and think and to rationally decide. And that has a lot to do with the spread of algorithms in science and society. ” 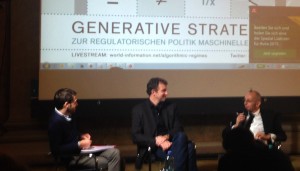 Explains Olga Goriunova from the University of Warwick: “The digital artifact is neither an object nor its representation It is the distance between the two” Francesca Musiani, researcher at the Institute for Communication Science at the Paris-Sorbonne summarizes the solution as follows: “Regulation of algorithms rather than government by algorithms” 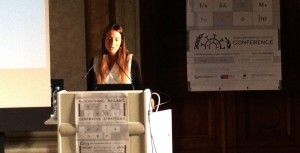 Paolo Ruffino, lecturer at the Goldsmiths University London and member of the artist group IOCOSE focused his research on computer game studies. He describes algorithms as a form of mimicry, of assimilation, a formula that leads to the disappearance of the human “they now take on even the creation, testing and playing of digital environments”. Gerald Raunig, a founding member of the European Institute for Progressive Cultural Policies (eipcp) warned of a machine colonization of the future and an enforcement algorithmic processes even against the resistance of the people: “The combination of calculation and prediction of the future is first determined by counting the countable, assimilates and normalizes all differences, while our presence is adapted to these predetermined future.”

Active participation of the audience via video stream and social media contributed to the mutual exchange. “The new constellation changing methods to measure the world, describe not only the reality but also contribute more and more to actively create It.” said hosts Felix Stalder and Konrad Becker from World-Information Institute at the end of the conference. “It is clear that we cannot and also do not want to live without algorithms and an anticipatory order. However, the public, the majority of people does not have a clear view of what kind of world it will create.” 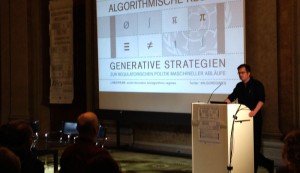 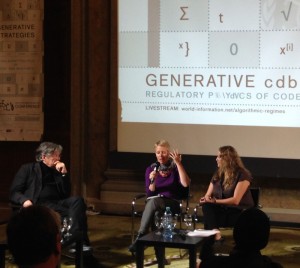