Critical Netpractice / Past and Future

A presentation of the “Critical Net-practice” issue of the Springerin magazine produced in collaboration with the World-Information Institute. A talk with the artist and activist Zoran Pantelić and the Slovenian artist and theorist Marina Gržinić as guests and Konrad Becker and Felix Stalder from World Information Institute was introduced and hosted by Christian Höller from Springerin.

This debate at the MAK Kaminzimmer also followed up on the conference and exhibition in Lentos Art Museum in September. The occasion marks a 20-year anniversary of both institutions as opportunity to review the changes in digital culture and politics since the pioneer times of the mid-90s. Those were the days where platforms like Public Netbase in Vienna, Mute in London or later kuda.org in Serbia were founded and a spirit of experimental and political use of new technologies was all over those sites.

Konrad Becker opened with pointing to some of the fields of inquiry in the framing of cultural production and reality itself through information technologies. “Realities are determined by representations, and information systems operate into the coordinates of individual reality. Can an artistic practice that includes new digital media, do more than just propagate technical progress or provide an affect stimulus in aestheticized production cycles? Can there be artistic production that not only tickles the cultural taste buds, but is a critical instance of reflective, intellectual work? Is art primarily a lifestyle accessory, or does it still have potential for critical analysis? Has resistance become futile in the New Spirit of Capitalism and the creative imperative?”

Zoran Pantelić started to recapitulate the trajectories of his work in the last two decades: “A lot of artists shared this enthusiasm, this euphoria of this melt or hybrid of many, many different categories or disciplines in the 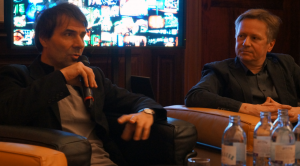 mid-90s. Analyzing the experiences of the first institutional critics in the late 60s, our art collective Apsolutno started as a second chance to experiment how to be active outside of institutions and to broaden the scene of the arts.”

He explains that “As the new technologies became interesting the wars started in Ex-Yugoslavia and so the Internet was in a very symbolic way the most important channel to be in contact with the international scene. We realized we have to establish something that has to be more permanent and present and we started to think of some examples as De Waag in Amsterdam or Netbase in Vienna. It was a playground for technology for people who came from different sectors like IT, theory, humanities or arts to provide for a new effort for production.”

Even though they always believed in experiment and in more interdisciplinary formats, they see it less and less reflected in today’s art production: “It is not possible any more to make things with an open, unknown end.” Under pressure to constantly make applications, to present defined goals and specific relevance of results the possibility of experiment disappears. Under the aspects of neoliberal geopolitical and economic circumstances conservative approaches appear stronger than ever. Referring to the power of critical analysis of representation systems in artistic practice he concludes: “I really believe that through art we can produce new models -or un-models.”

Marina Gržinić began her statements by reminding us that “When we talk about the media we should also talk about the social.” In reference to Zoran’s statement she confirmed that the internet was connected with the question of war. “When in 1994 in Bosnia information meant practically CNN, there were radio amateurs who sent information about the ongoing war on the internet.” 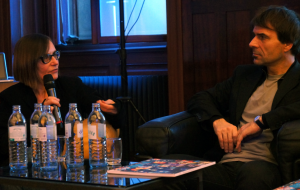 raham Harwood’s notion of the “racist algorithm” in his contribution to the Springerin issue as the best concept for understanding the new segregations in the digital, but also in terms of surveillance and tracking in real space. This manifests in the re-materialization of the digital culture in the form of global divisions of labor. “There are major societal processes which cannot be understood with the notion of bio-politics, processes which are not about administering life, but about ordering death: necro-politics.” For her this is demonstrated for example in creating millions of obsolete, disposable people in the so-called third world. Confirming that capitalism is the reality where everything is sped up and every kind of resistance is instantly incorporated she sees the only possible way of change from outside the capitalistic system. Since today every call for the radical can be transformed to look like a terroristic demand “it is necessary to change the conceptual framework in which we actually talk – one of the possibilities to approach this is through rethinking history”.

After an hour of critical analysis and discussing necro-politics the evening concluded nicely with a live soundtrack from Ca.tter, followed by lively engaged chatter and conversations with food and drinks provided by the MAK.